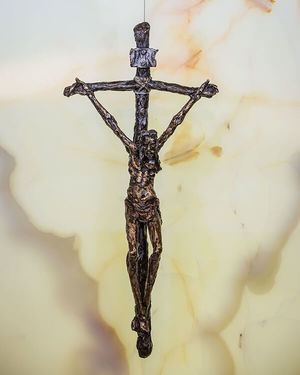 This crucifix by Gib Singleton hangs in the ACE chapel

The historical associations between Catholicism and the arts are magnificent and bountiful. The history of music and the visual arts is inextricably linked with Catholicism. Through the early modern period, the Church was the most prominent patron of the arts, and virtually all art was created for the greater glory of God. Some of the most spectacular artworks in the history of humankind arose in this context. Even today, architecture, art, and music remain central to the liturgical life of the Church.

The American sociologist Robert Wuthnow argued in his 2003 book All in Sync: How Music and Art are Revitalizing American Religion that a high interest in art is often accompanied by a high interest in spirituality. Art can help deepen and awaken spirituality. Great artworks, as Pope John Paul II points out in his Letter to Artists, represent “genuine ‘sources’ of theology.”

Moreover, a defining aspect of Catholicism is sacramental vision, the idea that the divine manifests itself in this world, that the transcendent reveals itself in finite reality. Though we suffer and sin in our humanity, we are nonetheless able to recognize God’s continuing presence. The arts are privileged in this context insofar as they bridge the spiritual and material worlds. The creative and mediating vision of art complements Catholicism’s sacramental vision.

Because Notre Dame is enrolling more and more students from around the world and from diverse American backgrounds, we should do all we can to foster a welcoming environment, which includes reaching out to diverse traditions, also in areas central to Catholicism.

The challenge of integrating the global Church with diverse, local cultures is also an opportunity for interculturation and recipricoal learning. The diversity of styles and emphases that we find in crucifixes from around the world are extraordinary. We want to cultivate that diversity here on campus and through these connections express our solidarity with artists and regions from around the world. Art provides us with sacramental vision in a way that is extraordinarily open to diversity. Artistic masterpieces are possible of various kinds and from various traditions. Such diversity should be embraced at a Catholic university. 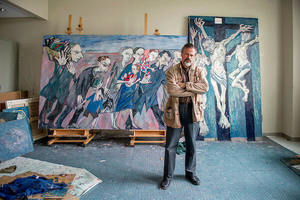 Maxim Kantor at Notre Dame in 2015

The crucifix initiative brings three priorities into contact with our core Catholic identity and mission: the elevation of the arts; the increasing internationalism and diversity of the University; and the emphasis on student research and creative work. Because we know that many former students are active as artists, we will seek to engage alumni as well.The sacramental dimensions of the Notre Dame campus date back to the founding members of the Congregation of Holy Cross, who laid out the campus in the form of a cross. To reinforce our sacramental vision, the University has over the years acquired great religious artworks. These acquisitions have included crucifixes, for example, Ivan Meštrović’s large wooden crucifix in the Great Hall of O’Shaughnessy, Maxim Kantor’s oil painting Golgatha in Innovation Park, and John Bisbee’s nail crucifix in Carole Sandner Hall. As the Kantor and Bisbee examples indicate, in the past two decades the prominence of the arts on campus has increased substantially.